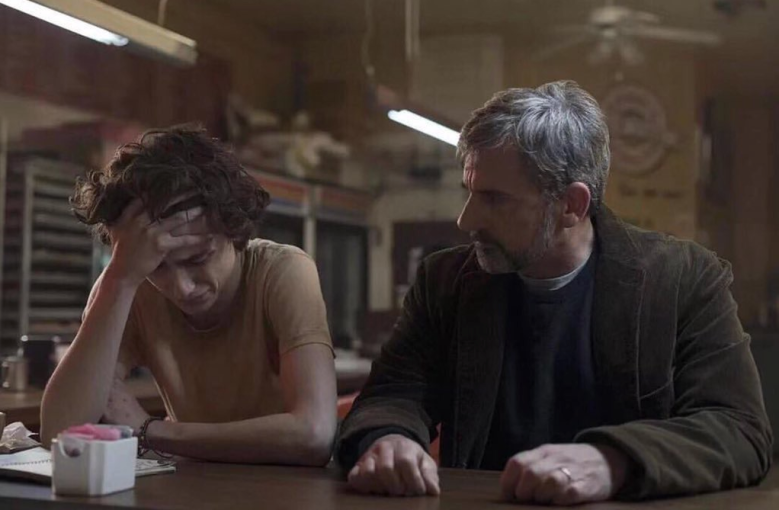 The Oscar-buzz worthy film “Beautiful Boy”, directed by Felix Van Groeningen, stars Timothée Chalamet as Nicolas Sheff, an 18-year old who struggles with drug addiction, and Steve Carrell as Nic’s concerned father, David Sheff. The film takes the audience through the father and son’s struggles as Nicolas grows from innocent adolescent to a severe meth addict. 115 people die every day as a part of the opioid crisis in the United States and this number is growing but what can be lost in this crisis is the impact of the addiction on the family unit. The movie captures addiction’s vicious cycle, taking on the perspective of David, Nic’s father, and the heart-wrenching experience he has with his son’s addiction and mental health crisis. The film captures the dad’s helplessness. It shows Carrell’s character David walking around with an absent look, constantly doing research on how to help his son, but always coming up short. David even takes drugs in a desperate attempt to try to better understand what his son is doing to his body.  It is a shocking yet compelling moment in the film. In one scene, Nicolas flees the family’s house and is gone for two days. His dad drives around looking for him helplessly. Nic is eventually found and admitted into a 28-day rehabilitation center and receives family therapy, detoxing and help from therapists, but he runs away from the facility. Actor Timothée Chalamet does an incredible job playing a teenager with a drug addiction, depicting the constant struggle of seeking independence and the desperate cry for help  calling his father on the phone after running away. At Nic’s lowest point, he steals from his dad and drives off in his car. His step mother Karen, played by Maura Tierney, chases him in her car but eventually gives up in tears. David is eventually pushed to complete exhaustion after chasing his son around the country and, for the first time, denies his son’s calls seeking comfort. After Nic overdoses on meth, but survives and is admitted to a hospital, the film leaves the audience with the hope that Nic detoxes and finds a new purpose to fill his void of drug use. The film is an important movie to capture one story of what’s happening in many small and large towns across the US today, how one person’s substance abuse affects the entire family in life-altering ways.